Dogs are cute and lovable all the time. They entertain us most of the time, but have your dog’s actions ever put you in a dilemma? Are you ever left wondering what the hell he’s trying to convey?

Sometimes, your dog’s weird actions might have left you rolling on the floor with laughter as well. Such as your innocent friend chasing his own tail in circles or shaking his head continuously.

Dogs communicate with us through various actions. These behaviors tell a lot about how they are feeling and what they want from us. If you know the meaning of these actions, you’ll be able to help him.

7 Common Dog’s Actions and Behaviors & What They Mean:

Dogs shake their heads to relieve tension after being aggressive or alert. They might also do this in case of ear infections to get rid of itching and ear discharge. They may also if they have got water in their ears after swimming or bathing. Use swimmer’s solution post-swimming to prevent head shaking due to water in the ears.

2. Tilting Head On One Side

A dog will bend his head when he is uncertain about something in which he is genuinely interested. Dogs exhibit this behavior when they wait for additional information, especially from their human family. They can also turn their heads to accurately pinpoint the source of a sound while listening to it.

You might have already guessed the reason— they want to play. Well, that is partially true. Your dog may also bring you toys just to show them to you as they trust you. Remember, you may hurt your dog if you merely throw the ball when your dog is just trying to show it to you.

Your dog is bowing your when he extends his front limbs and touches his shoulders to the ground. A dog bows to his favorite humans to greet them. It may also mean that he’s telling you to play with him. If a dog bows to a female counterpart, it means he’s trying to impress her.

The sight of your dog vainly trying to catch his tail is quite hilarious. Often, they do so when they are bored. It’s a fun way for them to expend some energy. However, it may also mean that they are experiencing a medical issue or have developed the compulsive disorder. These issues must be addressed immediately.

Your heart may ache when you see a dog with its tail tucked between its legs. The poor creature may appear to be so frightened that he is trying to get as little as he can, if not entirely disappear. When dogs are anxious, terrified, guilty, or ashamed, they act in this manner. Almost always, it’s a poor indicator.

We hope with the help of this article, you’ll be able to connect better with your four-legged friend. Now, all you have to do is to respond to their silly behaviors when required! 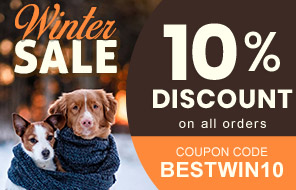